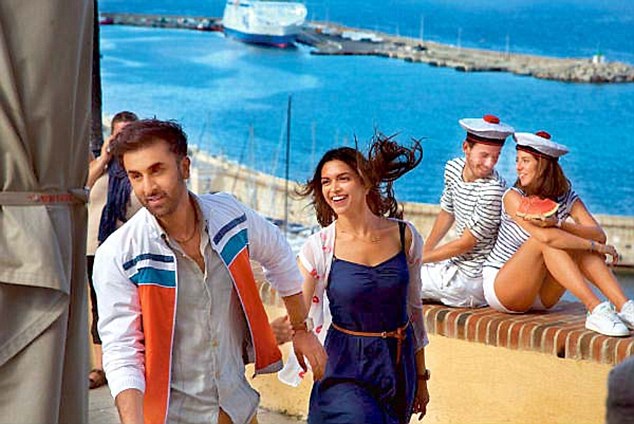 1. The X Factor: There is a belief that former lovers make much better screen pairs than couples in a relationship. Remember Kareena Kapoor and Shahid setting the screen on fire in Imtiaz Ali's Jab We Metimmediately after they broke up? By that logic Ranbir Kapoor and Deepika Padukone in Tamasha should score higher grades in the compatibility test than Ranveer Singh and Deepika in Bajirao Mastaani.

2. This year so far there have been no intense love stories to ignite the screen. Tamasha is the first take in 2015 on the twists and turns of the heart.

3. Deepika Padukone has performed an amazing shot where she has her head on a table looking towards the camera from an angle that is normally not a part of mainstream cinema's lensed lexicon. That one fleeting glance of woman in love anguished by a feeling of raging defeat is worth the weight in gold. Here's Deepika, unplugged.

4. Ranbir Kapoor and Deepika Padukone's earlier films together have been a mixed bag. Bachna Ae Haseenohad only one segment devoted to this couple. Their only other full-length film together Yeh Jawani Hai Deewani was muddled bewildering mishmash of relationships among a quartet of youngsters who should have been slapped by their parents when they were younger. It worked much better on release than in hindsight. Tamasha is in that sense a true litmus test for the pair's conjoined powers.

5. Imtiaz Ali's rapport with Ranbir is remarkably resonant. They first worked together in Rockstar which many consider the actor's best to date. (I disagree, Saawariya remains Ranbir's most cherish able). Now inTamasha the two have evolved as cinema persons and hopefully as human beings too.

6. Producer Sajid Nadiadwala and director Imtiaz Ali earlier collaborated on the very provocative yet deeply flawed Highway which boasted of an enormously evolved performance by Alia Bhatt. This time the producer-director again claim to have covered new ground. We have no reason to disbelieve them.

7. Tamasha addresses itself to the question of an individual's yearning as weighed down by his effort to eke out an earning. The clash of the motivational and the real should give a cutting edge to the narrative. We don't have celluloid heroes and heroines who seek to gratify their imagination by seeking to harness it into wish-fulfilment.

8. A R Rahman's second collaboration with Imtiaz and Ranbir after Rockstar. There is a sweet-timbred love ballad 'Tum Saath Ho' sung by the over-exposed Arjit Singh (must he sing every evocative love ballad that makes its way into our movies?) and the long-time-no-hear Alka Yagnik. The number numbs.

9. The love bird's catch-line "What happens in Corsica stays in Corsica"… Not quite. Tamasha will do for this scenic French town what Zindagi Na Milegi Dobaara did for Spain. And what Rockstar couldn't do for Prague.