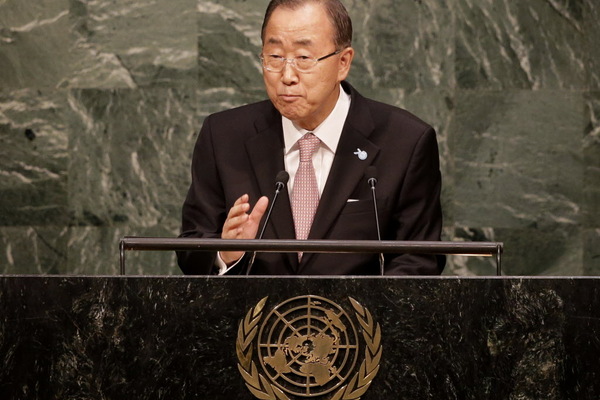 At the United Nations General Assembly this week, leaders from around the world will meet to agree on a new list of goals that will combat hunger, eradicate poverty, and improve the quality of life for people around the globe. The list, called the 17 Sustainable Development Goals, expands upon the list of 8 Millennial Development Goals (MDG) that were put in place in 2000 and are set to expire this year.
Here's the list:
1. No Poverty
This goal, which seeks to eradicate extreme poverty by 2030, is a continuation of the previous MDG of "eradicating extreme hunger and poverty." The UN currently defines extreme poverty as living on less than $1.50 a day. Perhaps most importantly, this goal includes measures for the protection of those who have had to leave their homes and countries as a result of conflict. The Syrian refugee crisis has displaced approximately 60 million people since it started, and that number continues to grow.
2. No Hunger
The UN has now decided to tackle its twin goals of eliminating poverty and hunger separately. In this new goal, the UN seeks to both improve the access that the world's poorest have to food, and the ways in which that food is produced.
3. Good Health and Well-being
This goal broadens the UN's focus beyond the fight against HIV/AIDS and malaria, which were the targets of the previous version of this goal and remain a pressing concern. It focuses on continuing to reduce child mortality, the health of mothers, and combating other diseases.
4. Quality Education
Improving worldwide access to education remains a top priority in the 2015 version of the list. In a change from the previous MDG, the new Sustainable Development Goals call for free education through high school, rather than limiting it to primary school only.
5. Gender Equality
This continues to be of pressing importance for the UN, and has become its own goal, advocating for the elimination of violence and discrimination against women. It also calls on countries to improve women's social and economic standing.
6. Clean Water and Sanitation
The UN reports that by 2050, at least one in four people is likely to live in a country affected by chronic or recurring shortages of fresh water. This goal aims to improve sanitation and hygiene practices, including access to fresh water, in developing nations by 2030.
7. Affordable and Clean Energy
A new goal for 2015, this goal seeks to broaden both the development and use of renewable energies by 2030, the next deadline date for achieving these goals. Heavy emitters like China are already stepping up to curb their emissions.
8. Decent Work and Economic Growth
This is also a new goal on the 2015 list. The UN is interested in both the creation of new jobs, and the development of those jobs that are sustainable enough to lift employees out of poverty. According to UN estimates, "roughly 470 million jobs are needed globally for new entrants to the labor market between 2016 and 2030."
9. Industry, Innovation, and Infrastructure
Also a new goal, focused primarily on the building of roads, rail systems, and telecommunications networks in the developing world.
10. Reduce Inequalities
This goal is focused on reducing the inequalities in income distribution among the most marginalized populations in the world, both within developed and developing nations. The UN estimates that "a significant majority of households in developing countries – more than 75 percent of the population – are living today in societies where income is more unequally distributed than it was in the 1990s."
11. Sustainable Cities and Communities
With urban populations on the rise over the past decade, the world is on a hunt for ways to house, feed, and employ that burgeoning population. This goal seeks to tackle that problem by reducing the number of people who live in slums by 2030. It also aims to reduce the pollution output coming from those urban centers.
12. Responsible Consumption and Production
This goal, a continuation of Goal 6, seeks to improve the access that people in developing countries have to food and clean water, while at the same time improving how food is produced on a global scale. It also aims to address the global obesity crisis.
13. Climate Action
A new goal for the 2015 list, the UN's Sustainable Development Goals looks at quickly and efficiently reducing greenhouse-gas emissions in both developed and developing nations. In addition to talks held at the UN General Assembly, the world is also expected to meet again in December in Paris to agree formally on emissions reductions.
14. "Life Below Water"
Another new goal for 2015, the UN is interested in sustainable fishing practices and protecting marine life. They estimate that nearly "40 percent of the world oceans are heavily affected by human activities, including pollution, depleted fisheries, and loss of coastal habitats."
15. Life on Land
The UN is also interested in protecting creatures on land, with an emphasis on reducing deforestation and desertification.
16. "Peace, Justice, and Strong Institutions"
A goal that envisions fair and free elections, as well as governmental accountability at every level. The UN estimates that "corruption, bribery, theft, and tax evasion cost some US $1.26 trillion for developing countries per year."
17. Partnerships For the Goals
In keeping with practices established with the 2000 Millennium Development Goals, the UN continues to envision a global framework of support to ensure that its goals are realized.

Watch the 'WE THE PEOPLE' Video here